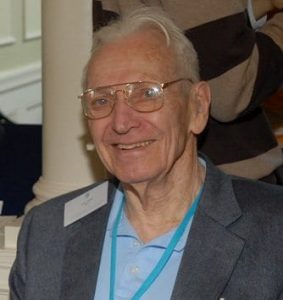 Carl Christ had a distinguished record of scholarship across multiple topics.  His interests ranged from econometric methods, especially the testing and evaluation of econometric models, to monetary and fiscal policy and to the history of econometrics.  His work on macroeconometric models was rooted in the Cowles Commission tradition of structural econometric models based solidly on economic theory and careful attention to identification, endogeneity, and consistent and efficient estimation.  He wrote a seminal paper on the forecast error variances from those types of models and on their sensitivity to model specification.   He authored a widely used introductory econometrics textbook in 1966, Econometric Models and Methods, which popularized the structural econometric approach.  The textbook was translated into several languages.  In the area of monetary and fiscal policy, his major contribution was a deep incorporation of the federal budget constraint in all its dimensions–fiscal, monetary, reserves, debt, and so on–into macroeconometric models, which had inadequately incorporated those features prior to his work.  He showed that policy multipliers were very different when the budget constraint was properly modeled.  His interest in the history of econometric methods was also strong, and he wrote a history of the Cowles Commission during its first 20 years which was published in 1952, an expanded version of which appeared in the Journal of Economic Literature in 1994, and he wrote a history of the founding of the Econometric Society as well as several other pieces on the history of quantitative analysis.  He was a student and admirer of Tjalling Koopmans and, with Martin Beckmann and Marc Nerlove, edited the Scientific Papers of Koopmans.  A symposium in his honor where papers relating to his research were presented was held at Johns Hopkins in 1995 and was published in the Journal of Econometrics in 1998.

Christ served in numerous professional and department capacities during his career.  He served in multiple capacities of the American Economic Association, including serving as Vice President, serving on its Executive Committee, chairing several other committees, and serving on the Editorial Board of the American Economic Review.  He served in numerous roles for the National Bureau of Economic Research, including service as a Member, Vice Chair, and Chair of its Board of Directors.  He served on the Council of the Econometric Society and in several other capacities for the Society.  He was an elected Fellow of the Econometric Society and the American Statistical Association and received many other citations and awards.  At Johns Hopkins, he served as Chair of the Economics Department twice, from 1961 to 1966 and from 1969 to 1970.  He also served on numerous university committees throughout his career and into his time as Emeritus Professor.   The Department of Economics at Johns Hopkins has a named professorship as well as a named graduate student fellowship in his honor.

He is survived by his wife of 66 years, the former Phyllis Tatsch.

A memorial service will be held at Johns Hopkins at a future date.

Donations in Carl Christ’s honor can be made either by sending a payment to Ms. Donna Althoff, Department of Economics, Johns Hopkins University, 3400 N. Charles Street, Baltimore MD 21218, or by donating online where you should click on “secure online giving form” and designate that your gift be given to “Other” and then to “Economics Department Carl Christ Fellowship.”