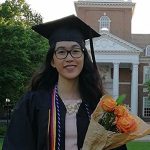 Wen Wen was born and raised in a suburb of Kuala Lumpur, Malaysia, and chose to study at Hopkins because she was originally interested in Neuroscience.  She then added the Economics major, attracted to the idea that the discipline provides a good framework for studying human behavior and decision-making.  Wen Wen particularly enjoyed Economics of Health taught by Dr. Bishai. “The class had a good blend of theory and application and provided me insight into the economics perspective of the healthcare system. I grew to appreciate how widely applicable the skills and theories of economics are.”

Wen Wen was co-president of the Chinese Students Association as well as secretary of Omega Psi, the Cognitive Science Undergraduate Society. She was involved in the International Student Ambassador Program, and also volunteered as part of the Refugee Action Project and with Charm City Care Connection.

Wen Wen pursued a range of internships, including working with the International Rescue Committee to provide assistance to refugees and asylees in identifying and meeting their employment needs.  In summer of her junior year, she worked with a professor from the Bloomberg School of Public Health and assisted with projects in Vietnam that focused on the psychological impact of injuries.  This was followed up by an internship at a public policy think tank in Malaysia where she witnessed first hand the election resulting in a change in government for the first time in 60 years. Says Wen Wen: “It was really exciting to think that the work I do can impact policy decisions in this historic time.”

Wen Wen is currently pursuing an MA in International and Development Economics at Yale University. Ultimately, she hopes to pursue a career in international development, with a specific focus on health issues. “I believe that there is much potential in developing economies and I would like to contribute, be it in my home country of Malaysia or any other developing nation. “

Do you have any advice for potential Economics majors?