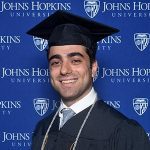 Gabriel Kabarriti selected to study at Johns Hopkins because of its reputation as a leading medical research institute. “After being accepted, I quickly filled my schedule to include classes that would allow me to excel in research by learning the basics such as biology and chemistry. I also filled my schedule with classes, such as economics, that would expand my knowledge and worldviews.”

Gabriel enjoyed introductory macroeconomics with Professor Robert Barbera and his discussions about the role of the Federal Reserve. Barbera emphasized decision-making:  “I was so intrigued by this concept that I continued to study economics and learn more about how people make decisions, as well as how these decisions related to medicine.”

Later, Gabriel conducted economic research with Dr. Antonio Trujillo at the Bloomberg School of Public Health. “We investigated how mergers in the pharmaceutical industry have affected prices that patient’s face at the counter, to help form policies that would ensure that patients are treated fairly. All in all, majoring in economics was the best decision I have made since coming to Hopkins, as it allowed me to gain additional insight to the world as well as pursue medicine.”

At Hopkins, Gabriel was involved in many extra-curricular activities ranging from Tamid, which teaches student about the Israeli and American economies, to volunteering in Thread, a local non-profit that fosters academic advancement for underperforming students, to running events like Arts For Hearts. The list goes on “Hopkins truly allowed me to join many clubs and thereby expand my interests.”

Do you have any advice for potential Economics majors?

“My advice to potential economics major would be take a class in economics just to see what it is like because I did not believe I would major in economics before coming to Hopkins. If you find it interesting, pursue the major and enjoy it; you never know where it may lead you.”

After graduation, Gabriel will be working at Johns Hopkins Hospital as a program coordinator, using “analytical methods I gained from my economics major to increase the efficiency of hospital programs.”  That sounds like a great goal, Gabriel!