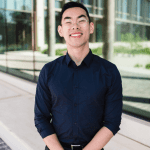 “I was interested in studying public health in college, but Johns Hopkins was initially not on my radar. A teacher in high school encouraged me to consider it.” Charlie ended up double-majoring in public health and economics.

“Going into my freshman year, I never would have imagined studying economics. I started out with plans to double major in public health and biology. After taking introductory courses to fulfill other requirements, however, I was interested in seeing what the upper-division economics courses had to offer. It was then that I began to understand economics as more than financial markets. The empirical work that related to health and well-being, in addition to the analytical tools used in econometrics, were fascinating to me.”

Charlie’s favorite class in the department was “Economics of Poverty and Inequality” taught by Professor Moffitt. “This course really unlocked my interest in the empirical work being done in the field. Econometrics (taught by Professor Husain) and Political Economy and Development (taught by Professor Campante) were also memorable due to their heavy emphasis on statistical methods and causal inference. These three courses provided me with skills I am  currently utilizing in my coursework at the School of Public Health and other research experiences.”

Charlie supplemented his coursework with internships at the 21st Century Cities Initiative, and the Baltimore Mayor’s Office of Immigrant Affairs. He also worked as an epidemiology data analyst in the Department of Epidemiology at Bloomberg School of Public Health. “I would not have got these positions if it were not for my economics and econometrics skills.”

Charlie was engaged outside the classroom as well, as co-president of the Vietnamese Students Association, participant and peer mentor for the Community Impact Internships Program at the Center for Social Concern, and as a performer with the Hopkins Yong Han Lion Dance Troupe.

After graduation, Charlie will be pursuing a master’s in health studies in epidemiology at the Bloomberg School. Ultimately, he plans a career focused on health equity.

“Don’t undervalue what you can experiences here, no matter how disparate your areas of study may seem,” he says. “Even though I’m not pursuing a traditional economics career path, I don’t think I’d have gotten the opportunities I have today if it weren’t for my economics experiences.”