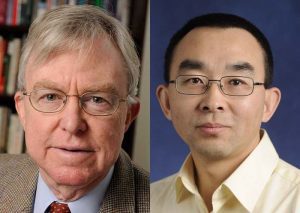 Professors Yingyao Hu and Robert Moffitt, together with coauthor Shuaizhang Feng, have a new working paper, “Long Run Trends in Unemployment and Labor Force Participation in China,” which shows that the official unemployment rate released by the government of China vastly understates the true unemployment rate and greatly exaggerates its stability. The true unemployment shot up to over 11 percent in the early 2000s, whereas the official rate was a little over 4 percent and has stayed there since then. The true unemployment rate has come down somewhat but has stayed high, higher than that of most other developed and less developed countries. Their findings have received considerable media attention; see http://fortune.com/2015/08/20/china-unemployment/ and http://www.cbsnews.com/news/behind-chinas-slowdown-signs-of-labor-unrest/.