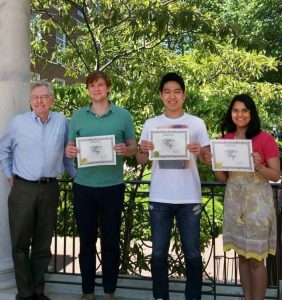 Congratulations to Ryan Bush, Parul Gupta, and Yeabin Moon, the winners of the 2014-2015 Professor Joel Dean Undergraduate Teaching Awards. These awards are given annually to those graduate students who have shown excellence as a teaching assistant or instructor in the undergraduate economics program. The award was initiated by Joel and Monia Dean and generously funded by the Joel Dean Foundation created by Professor Dean in 1957.  The awards are based on comments from the undergraduates on their Teaching Assistants.  Ryan Bush was called “the best TA I ever had since I entered college,” having addressed “every single concept clearly” and having “consistently displayed excellence in teaching by explaining complex concepts using simple, heuristic metaphors.”  Another said that Ryan “is a phenomenal teacher” who “has inspired and supported me in ways which are hard to articulate.”   Parul Gupta was described as having “an exceptional grasp of macroeconomic concepts” and “is able to translate that knowledgeable into something teachable.”   Another said that it is obvious that she “considers teaching a real joy,” and another said that “I could not have survived [the course] without [her] support.”  Yeabin Moon was called “the most patient and helpful TA I have ever worked with” and “is very dedicated to the success of his students,” as well as being “enthusiastic and encourage[ing] student participation” in his sections.   Others noted that he “was always very approachable” and “willing to spend the extra time to explain course concepts.”  Ryan, Parul, and Yeabin exhibit the exceptional excellence in teaching to which the Department aspires for all its graduate students.