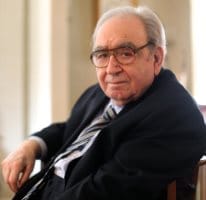 Robert Fogel died on June 11th in Chicago at the age of 86.  He was the Charles R. Walgreen Distinguished Service Professor of American Institutions at the Booth School at the University of Chicago.

Dr. Fogel was a pioneer in the use of econometric tools to study economic history, and an  important contributor to our understanding of long-term economic growth and of the interplay between economic development and human well-being.
Robert Fogel graduated from Cornell in 1948 as a history major with an economics minor, and later obtained a masters at Columbia (1958) and received his Economics Ph.D. at Johns Hopkins (1964).  He did seminal work on the role of railroads in economic growth, on the economic issues related to slavery in the United States (with Stan Engerman), and on the long-term inter-connections between health and economic status.  He was an inspiring mentor and his insights and direction have had a wide impact on the direction of research in the fields he studied.
Professor Fogel served as president of the American Economic Association (1998) and received the Nobel Prize in Economic Sciences in 1993. After he won the Nobel prize, he came and gave a lecture at JHU and reflected on his time here. A prolific writer, his most recent book, Political Arithmetic: Simon Kuznets and the Empirical Tradition in Economics, published a few months ago, chronicled in the early 20th century on the analysis of key questions involving the rate of economic growth and the distribution of income.