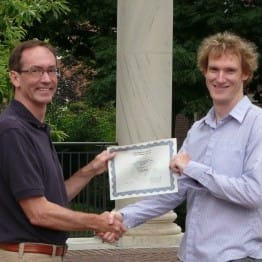 This award is given annually to the advanced graduate student who has demonstrated the best performance in one of the department’s research seminars. It is generously funded by alumnus Eugenio Castillo and his wife, Patricia, and is named in honor of Professor Emeritus Bruce Hamilton who was well-known for his insightful comments at department seminars.

Congratulations to Gizem Kosar, winner of the Eugenio and Patricia Castillo Award

This award is given annually to the student who has displayed the best performance in their first two years in the graduate program. It is generously funded by alumnus Eugenio Castillo and his wife, Patricia.

This award is given annually to those graduate students who have shown excellence as a teaching assistant or instructor in the undergraduate economics program. The award was initiated by Joel and Monia Dean and generously funded by the Joel Dean Foundation created by Professor Dean in 1957.